Half a dozen years ago a building I designed had just opened, and was the focus of attention of one of the biggest "opinion makers" of my country, Miguel Sousa Tavares, in his weekly opinion column in the "Expresso", one of the main Portuguese newspapers. Since I am a regular reader of his articles I read what he wrote right at Saturday morning. One can’t say that he enjoyed my building. In truth, he hated it and wasn’t inhibited to express his displeasure with the usual mastery. On top of that, my critic had an emotional involvement with the place, where he spends his holidays since childhood. The project in question refers to a new train station in Lagos, following the transfer of the completely obsolete old station to the local authority, to be transformed into a cultural facility. My critic was disturbed not only about the fate of the old station (which is actually not yet materialized) but also questioned the need for a new building and especially its aesthetics.

I confess that when I finished reading the article I felt both joy and satisfaction and of course some astonishment with the lightness of some of the opinions in it. But the positive sentiment predominated. For one simple reason: No breeder wants to be unanimous! In reality it’s the worst that can happen to us gather consensual opinions on what we do. Obviously that if we only take negative reactions it could eventually affect us, but some criticism, though acidic, in the midst of the received compliments, can only enrich us. As the saying goes "what doesn’t kill us makes us stronger."

The point is that, in our works, we just manage to be consensual if we move in a range of conformity and good behavior, in a way that doesn’t bother people, but doesn’t surprise them either. Then we can have a work that doesn’t dislike anyone. But will it really please someone? Will it have the ability to arouse emotions, to move? Definitely, I don't care to be consensual.
On the following Monday, as soon as I got to the office, one of my colleagues came right to me. He had also read the article and was outraged! He asked me what we would do – Nothing, I replied with a smile. He was incredulous and ask me again - but why? Aren’t you offended with what is written in the article? No, I said, I obviously don’t agree, but anyone is entitled to an opinion! And I couldn’t resist playing a bit: In fact, I’m even grateful, it’s almost the recognition of my maturity as an architect, the first real controversy in which my work is involved ...

I don’t think my colleague has agreed or even understood my reasons. Anyway, opinions, one can’t really please everyone!
Projects
HBG
Nova Estação Ferroviária de Lagos 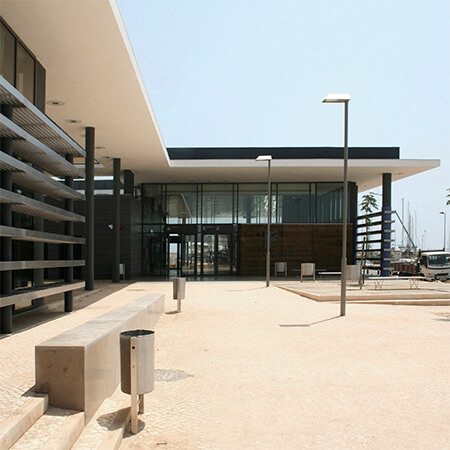